YOU want to control your social media feed. You want to own your follower lists. You don’t want to have to please the poor, pitiful moderators at some giant, cynical Silicon Valley behemoth. Just like on your blog, nobody should be able to shut you up—though, to be sure, they can shut you out of their own feed. In fact, if you leave Twitter, or Facebook, or whatever, you’d like to be take along your content and your followers and still have them, with just as much impact as they were having before. How could we make that possible?

Well, why not use the same open network that connects our blogs together—RSS—to connect our social media? That was the thought I had last January, when I posted “We Want to Pay for a Good, Functioning WordPress Microposting Plugin.”

The Knowledge Standards Foundation took on the project, and the first example microblog—or, as we call it, “minifeed”—was StartThis: 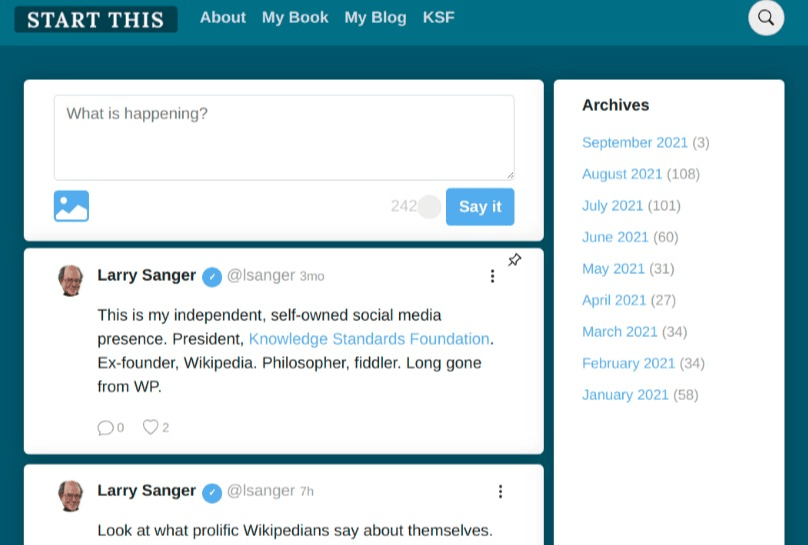 The new Minifeed theme turns a WordPress blog into a social media feed. StartThis happens to run on my own NAS sitting in a box at home and backed up offsite. It’s pretty cool to be able to control my own social media feed literally from the comfort of my own home. There are over a dozen other Minifeed installs, including one for the Minifeed project itself. You’re going to see a lot more popping up when we finish version 2. When v2 is ready, we’ll make it fully open source (both libre and gratis). It might just change the world…for the better. We’ll take back what’s ours.

In the following, “mini” is short for “Minifeed”.

The first step of v2 is to create a social media reader. This is a big enough job that it might occupy all of v2, but we do want to go further to support cross-mini (or inter-mini) conversations as well as a notification feed. We will build the reader first, anyway. The basic requirements can be briefly listed:

Assorted feature requests associated with the above:

I will continue to work on this post over the next few days to weeks, so let me know if you have any special (related) requests or ideas.

In these requirements I distinguish between the act of following a feed and the display of the feed (the latter is covered below under “Feed Reader”). The basic requirements here are simple:

How to Decentralize Data Aggregation

One special difficulty about decentralized social media (especially such functions as counting likes and shares) is that it involves aggregating data across the entire network; for example, how do we calculate the number of “likes” of a post, if there is no master database containing all social media posts, and a function to count them up within a database? Can we do that without a giant central database? Centralized aggregators would make this possible, but they also place individuals at the mercy of much bigger organizations—ultimately, whoever does the job of centralization best will govern the network.

Besides, especially for smaller interactions among relatively few people, aggregators should not be necessary. The basic idea is to use a propagation model. The idea behind the strategy is simple:

In summary, one suggestion is that you push all updates to your own posts to BitTorrent, and you grab the data you need to construct your feed from BitTorrent. But exactly how it will work we leave to the engineers.

The feed reader (or just “feed”) is similar to, but to be distinguished from, the notifications feed (or just “notifications”). The feed reader displays, according to some algorithm (we can put them in reverse chronological order of receipt, to start), the posts of the feeds one is following. By contrast, notifications include replies, mentions, reposts, likes, and other items of interest to the poster which do not appear prominently in the feed.

In this, we are drawing the same distinction Twitter does. There is a good reason for doing so. A feed gives you new material to consider. The word “feed” is short for “newsfeed,” and a news feed gives you news, or discussion-starters, not the meat of the discussion. Your notifications, by contrast, are a feed in a derivative sense—a list of new posts and activity of interest to you.

So here are the feed reader requirements, design and functionality combined:

High priorities (may not be listed above)